Production of Biochar via Slow Pyrolysis of Seaweed and Wood 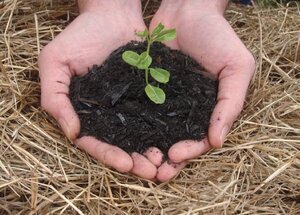 The team is working with Oregon Dulse through project sponsor Chuck Toombs. Oregon Dulse grows a seaweed strain called Pacific Dulse (Develeara Mollis) which has seen widespread media attention for tasting like bacon when cooked. Oregon Dulse plans to upscale production significantly to extract plant protein from seaweed to be used in meat substitutes. Protein extraction leaves a significant amount of seaweed biomass, i.e., leftover plant matter. This biomass can be converted to biochar via a process called pyrolysis in which biomass is burned in a low oxygen environment, producing bio-oil and gas products, known as biofuels, and the desired product biochar. Biochar is a stable product mostly comprised of carbon. As such, production of biochar from biomass is a way to remove carbon dioxide from the atmosphere and store it in a stable form. This is known as carbon sequestration. Moreover, biochar is a great soil amenity which can be used in agriculture to reduce fertilizer use. Implementation of large-scale biomass production at the Oregon Dulse production site has the potential to produce a carbon negative plant protein. The team has been working with Mr. Toombs to design a process to convert wood and seaweed biomass into biochar.

To address this project, the team moved from the ground up, only knowing how much seaweed biomass will be produced annually. Through literature research and meeting with a pyrolysis expert, the team determined optimal operating conditions for maximizing biochar yield via a pyrolysis reaction. The team determined slow pyrolysis of a 4:1 dry wood to dry seaweed feed, with a temperature range of 450oC to 600oC would maximize biochar yield. This is the desired outcome as increasing biochar yield increased the amount of carbon sequestered from the atmosphere. From there, the team began searching for a commercially available pyrolysis reactor and settled upon the Pyrocal CCT 18 reactor configuration, as it met the operating and throughput requirements determined by the team. The team next moved on to perform energy and material balances to ensure the proposed process is carbon negative and does not require external energy input. In fact, the team found the process produces excess energy which can be used in other areas throughout the plant, further reducing the environmental impact of plant protein production. At this point in time, the team has a preliminary process design and has verified the process meets the project goal of producing carbon negative protein. Moving forward, the team will perform preliminary economic analysis to verify the economic viability of the system, as well as performing safety analysis on the system to identify and mitigate potential dangers.