An Investigation into Reactor Type for Bibenzyl Production 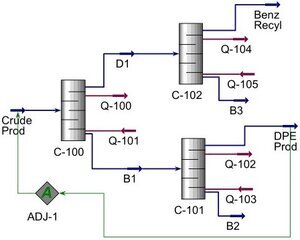 This project, in partnership with Albemarle, was the designing and optimization of a chemical plant producing 1,2-diphenylethane (DPE or bibenzyl) from the Friedel-Crafts synthesis of benzene and dichloroethane catalyzed by aluminum chloride. Bibenzyl is a key chemical component that, when brominated, is used to make flame retardant coating that can be used in wires and computer servers. The details of the current batch reactor process were provided, and the team tasked with designing the separation system cable of producing 5,000 metric tons of 99% pure bibenzyl. The side products had substantially different boiling points compared to bibenzyl and therefore distillation was determined to be the optimal purification process. Furthermore, the team was given leave to optimize the current system by investigating potential benefits of using a continuous stirred tank reactor (CSTR) instead of the batch reactor. Aspen HYSYS and Aspen Plus were used to simulate the distillation columns and CSTR process. The reaction also produced notable side products of toluene, ethyl benzene, and hydrochloric acid. Toluene and ethyl benzene chemicals are both highly flammable as vapor and liquid. Hydrochloric acid is corrosive to many metals including steel. These proprieties required careful consideration during the development of plant to mitigate equipment damage and prevent dangerous accidents. This also included a safety analysis of the plant and chemicals to determine several potential employee and environmental hazards. To mitigate the formation of side products, reaction temperature was maintained below the boiling point of benzene at 79 °C. Furthermore, the reactants were mixed at a ratio of 12:1 benzene to dichloroethane.

For both the batch reactor and the CSTR models, two distillation columns were needed for the successful purification of bibenzyl. An additional distillation column was designed to separate the excess benzene for recycling to save on operating costs. Hastelloy B-3 was elected to be the construction material due to its resistance to hydrochloric acid corrosion at all concentration and temperatures up to 100 °C. This however did substantially increase the capitol cost of the separation systems. The purification system for the batch model had an estimate total cost of $1.04 million. The CSTR system cost more at $1.5 million due to the benzene separation tower being about twice the size of the tower designed for the batch model. The CSTR model had substantially more light key side products thus purifying the benzene was more difficult requiring more distillation trays.

Reactor vessels were sized from design equation based of the second-order kinetics of the reaction. Both models were capable of meeting the annual product goal. The batch vessel was sized to be 6,475 L. This would require 3,300 annual batches to meet the production goal. The CSTR vessel was sized to be 14,640 L. To meet production goals, 40,2500 lbs. of bibenzyl would be produced per day. Again, Hastelloy B-3 was selected for the vessel material due to the corrosive nature of hydrochloric acid. The batch reactor vessel has a capitol cost of $624,000 while the CSTR model was more expensive with a cost of $1.2 million. Thus, with both models capable of meeting the production goal, when comparing capitol costs, the batch reactor model was the optimal design choice.