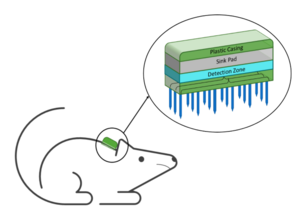 The animal stress detector is a non-invasive, wearable patch that semi-continuously measures corticoid concentrations in subcutaneous interstitial fluid (ISF). This device is intended to determine the relative stress levels of animal research subjects, initially focusing on mice. By quantifying a known stress biomarker, animal research studies can become both more ethical and better controlled. To prove that our device can deliver these measurements, we developed three prototypes. Our first prototype is a scaled-up 3D physical model of the device designed in SolidWorks and 3D printed to convey the overall geometry of the device, specifically highlighting the rounded cap, which prevents the device from getting rubbed or scratched off the skin. Our second prototype was designed in COMSOL to demonstrate the structural integrity and durability of the microneedle array designed to collect ISF while puncturing the outer layer of a rodent’s skin. Our final prototype validates that capillary force can act as the sole driving force of fluid using a combination of porous substrates and hydrophobic channel barriers. We predict that this device will cost $28 million to design and manufacture in the first four years, and we predict a complete return on investment after about seven years. There is still a substantial amount of research and development necessary before the animal stress detector enters the market, but it has the potential to revolutionize animal research.

Humans have the ability to communicate their emotions verbally and express when they are scared or stressed. Animals communicate through behavioral changes or body language, but there is not a clear or precise way to quantify their stress levels. In research studies, it is especially important to have a method of determining an animal's level of stress to ensure ethical handling, and a quantitative method of stress detection would streamline and validate behavioral testing. The device we designed would provide researchers with a non-invasive, semi-continuous method of determining stress levels in animals (mice specifically) by measuring cortisol levels. Cortisol is a hormone that has been shown to correlate directly with stress and can be measured in the fluid found in and around cells, known as ISF (interstitial fluid). The device will attach to the back of a mouse’s neck using a patch of microneedles and adhesive material. A set of microneedles in an array will be hollow and draw up ISF via capillary action, while other microneedles simply function to assist in adhering the device to the animal. The ISF will flow in small channels through the device to a detection region where an electrochemical reaction measures the amount of cortisol in the ISF and outputs a concentration. The device takes measurements over short time intervals and tracks changes in the concentration to establish a baseline cortical level and help researchers identify causes of stress. As a proof of concept for our device, we created a 3D printed model of the device as well as mathematical and physical models of different aspects of the device, including the microneedle puncture force and microfluidic flow patterns of ISF within the device.

When people are upset, scared, hurt, or stressed, they can communicate by talking to tell other people how they feel. Animals can sometimes use body language (tail up/down, ears perked/back) to show how they are feeling, but it is more difficult to understand. The goal of this project is to design a small device that can help people know when animals are feeling stressed or scared. The first animal we are designing the device for is mice because they are small and commonly used in laboratory experiments. The device will help people who are doing research to make sure the animals are being treated well and to know if something is causing their behavior to change. Our device works when it is attached to the back of the mouse’s neck with tiny needles (so small they don’t hurt at all). The needles are hollow like straws and pull up some liquid from the mouse. Inside that liquid is a little hormone called cortisol and a sensor in the device counts how much of this hormone there is. The amount of cortisol tells the researchers how the mouse is feeling. If there is a lot of it, the mouse is really stressed out, and if there's not very much then the mouse feels fine. The device keeps checking a couple of times each hour for a long time to see if the cortisol level changes at all. The trickiest part of the device to design was the needles because they are so tiny. We had to do a lot of math to make sure they would stay attached and also be able to work as straws to pull up the liquid without breaking. Other scientists have successfully designed the parts that measure the cortisol that we have used in our design as well.