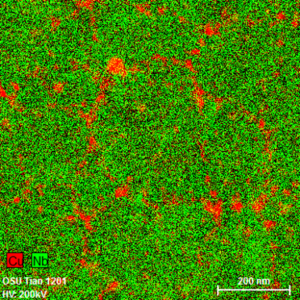 Nuclear energy provided 55% of America’s carbon-free electricity in 2019, making it by far the largest domestic source of clean energy [1].

-US Department of Energy

The development of new and refined elemental composition alloys has gained more attention due to the construction of Generation IV reactors; consequently, the materials needed for this application must ensure the safety, economic viability, and efficiency of the designs of the nuclear reactors. The microstructural analysis of alloys to be used for fuel cladding is of utmost importance since it must withstand the extreme conditions within the core and prevent mishaps such as loss-of-coolant accidents (LOCA).

There are multiple factors that must be considered when choosing the materials to be used for fuel cladding such as oxidation resistance, corrosion rate, strength, hardness, high-temperature tolerance, irradiation tolerance, void swelling, creep resistance, among others.

Copper and niobium are two elements that are being intensively studied as additives to alloy materials used for fuel cladding due to attractive properties both possess. The addition of Nb into alloy compositions has been proven to be beneficial because it increases the corrosion resistance of zirconium (Zr) alloys used for cladding [2-5]. Additionally, Cu was reported to be effective for reducing the corrosion rate of Nb-containing Zr alloys [6].

This binary model system of Cu and Nb is important to characterize at 500°C to 800°C so that the behavior between these two elements can be better understood for future improvement of alloys for fuel cladding.

The experiment was carried out at Oregon State University’s (OSU) Electron Microscopy (EM) facility. The sample used was a mixture of Nb and Cu sputtered on a silicon nitride (Si3N4) based grid. The elemental composition was 90/10 Nb/Cu respectively. The film was examined in a Transmission Electron Microscope (TEM) FEI Titan 80-200 TEM/STEM.

The alloy sample was then gradually annealed in the TEM using a heating stage. The temperature was set to increase 20°C per minute up to 800°C. After a waiting period of about 24 hours, the sample was taken for microstructural analysis via scanning transmission electron microscopy (STEM) mode using high-angle annular dark-field (HAADF) and EDS. The data was collected for 45 minutes.

Beginning at room temperature and heating it up at 20°C per minute, rapid crystallization was first observed at 500°C. The heating continued at the same rate until 800°C was reached. It is known that prolonged annealing at elevated temperatures can produce appreciable grain growth, which is a process where large grains grow at the expense of smaller ones [7]. This behavior was observed as the grains grew and recrystallized from 500°C to 800°C. At sufficiently high temperatures, some of the dislocations in a crystal order themselves into regular geometric patterns consisting of subgrain boundaries inside the larger grains formed by the wide-angle grain boundaries [7]. This was observed in multiple grains during the experiment.

The sample was then analyzed via STEM-EDS to see if there was elemental segregation. An elemental map demonstrates that copper segregated to the boundaries during crystallization. The segregation of copper to the grain boundaries can be explained by the fact that niobium and copper are immiscible elements meaning they will not form a mixture.

Further analysis to repeat this experiment with varying compositions of Nb and Cu is needed to search if copper’s segregation behavior persists at high temperatures. Experience with this annealing procedure will enable high-throughput characterization of Cu/Nb or other alloys.

Additionally, the characterization of these elements also serves as a model system for advanced oxide dispersion-strengthened (ODS) steels that have nano-scale oxide particles distributed throughout. Furthermore, irradiation experiments on this sample could be used to study how radiation damage microstructures are affected by a high density of interfaces in the two-phase material.

*WATCH THE VIDEO FOR MORE DETAILS*