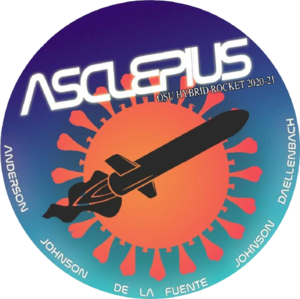 Founded in 2016, the Hybrid Rocket Team and has been a playground of development for new ideas in high-powered rocketry. The current members have been involved since 2018, pioneering the launch of its largest vehicle yet. Together we developed robust manufacturing, testing, and launch infrastructure. This year’s focus was on developing and improving recovery assemblies.

The dual deployment recovery systems in other high-powered rockets developed by OSU AIAA use flammable black powder charges. The recovery development team has developed a safer pneumatic deployment system that uses pressurized carbon dioxide canisters. Utilizing design principles oriented around the idea of rapid testing and prototyping, we did dozens of tests on every piece of the system and improved the design each time.

The system contains designated tubes for the drogue parachute, shock cords, and main parachute. It also includes housings for the electronics which include the flight computer and a camera to capture events during flight. All of the hardware is mounted on a pseudo-bulkhead before being slid into place and bolted to the rocket's frame. This greatly improves the ease of assembly, a primary design consideration. The Arduino-controlled electronics feature accelerometers and pressure sensors to detect apogee and the main parachute release altitude. The system is reusable, only requiring two twelve-gram CO2 cartridges per launch.

What makes this system better than the traditional black powder systems is the safety and reliability of the device. With the use of CO2 canisters, multiple mechanical and electrical safety mechanisms can, and were, put in place to prevent an off-nominal firing. All of the components can also be tested multiple times on the day of launch to ensure their resilience. While the device we made is heavier and more voluminous than the black powder alternatives, further iterations in future designs would improve the weight and size. Similarly, the device's efficiency only increases in scale; it would be best suited for large diameter rockets.