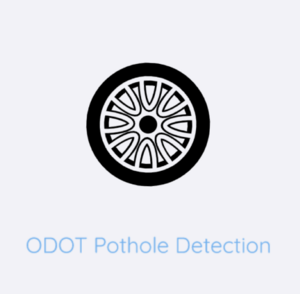 Our project helps the Oregon Department of Transportation (ODOT) discover where potholes exist on Oregon roads so they can send road crews to repair them as early as possible. ODOT currently has two ways of determining where roads need to be patched up. First is a van that is decked out with cameras and sensors. This van drives up and down every highway to evaluate road conditions. As you may imagine, this is a very expensive process which limits ODOT to one or two evaluations of each highway per year. This leaves many road issues untreated and leads to the second method of road hazard detection- angry calls from citizens. Our project aims to eliminate the need for both expensive vans and angry calls by implementing an automated crowd source pothole detection system.

Our project is split into two parts, an iOS app and a web app which are connected together by a database. The iOS app is intended to be downloaded by anyone driving in Oregon and is very simple to use. After allowing permission to use location services, the user chooses their vehicle type between sedan, SUV, and truck. Selecting the correct vehicle type adjusts the sensitivity of the pothole detection algorithm to prevent it from missing a pothole as well as to avoid false positives. A user's car type can be changed at any time from the app’s settings. The user then clicks the map button to be taken to a map view that is centered at their current location. They can then navigate around the map to see pinpoints of where potholes have already been reported. When they are ready to begin their drive, the user presses “start drive” and the app begins to collect data from their accelerometer. When a pothole is detected, the GPS coordinates and a timestamp are automatically collected and sent to the database. The user’s location is only collected at the moment a pothole is driven over. Once the user has arrived at their destination, they press the “stop drive” button and accelerometer readings terminate.

The web app is for ODOT employees to be able to manage and edit pothole information from the database. Employees can filter potholes by active or treated potholes as well as filter them by date of last report, severity, number of reports, and the highway they were detected on (if applicable). All tables are also exportable into CSV format to help ODOT analyze data. Once ODOT sends road crews out to fix a detected pothole, they can use the “edit treatment” button to fill in the date/time, weather, and temperature from when the pothole was treated along with their employee ID. Because the web app and iOS app are tied together by the database, potholes marked as treated are immediately removed from the map in the iOS app and potholes detected by the iOS app immediately appear in the web app.